Members of VA PNHP engage in numerous forms of activism in support of single-payer healthcare. This section describes past and ongoing opportunities for activism.

Report from the Mad As Hell Doctors Rally

Dr. Daw, retired surgeon from South Hill, and Dr. Harvey Fernbach and I joined other activists from Virginia and our PNHP colleagues from NY, Wisconsin, Oregon, California, Maryland and even Hawaii at the Mad as Hell Doctors rally in DC on Wednesday afternoon. We heard the Oregon docs who are Rad Onc, ED, Psych, and primary care specialists talk about why they were "mad as hell". They were the same sad patient stories that most of you can no doubt recite. A number of singer/songwriters including the "Raging Grannies" led us in spirited singing, and a local group from the "Backbone movement" had a giant Dracula puppet representing the "bleed 'em dry" insurance companies. Dennis Kucinich gave a rousing speech (a bit of the preacher in him) and told us that Oliver Fein, a founder of PNHP, had been Martin Luther King's physician, a fact I had not known. He reminded us that the arc of justice bends slowly and the battle is just beginning for single payer; we will not get it this year and we must be committed to organize people from all the corners of the country. A member of Mobilize for Healthcare reported on the 17 patients who were arrested for sitting in at the Aetna NYC office on Tuesday and said 400 more people are signed up across the country. Find out more at their site.

The Oregon docs asked us to do the following: Go to the Mad as Hell Doctors site and click on the "Letter to Obama" tab to send email asking Obama's secretary for a meeting with them. (Apparently someone in the office called the docs and asked when they were going to take it off the website as they were causing a clog up in the email box. The reply was, "When we can share a beer with the president.") They also asked that you tie a white ribbon around your tree, fence, gateposts, office sign, etc. to memorialize the 45,000 dying unnecessarily every year and to act as a sign of support for single payer. Put one on your lapel as well. And of course, contact your Congress people, especially in person. If you have time to go to DC, Margaret Flowers in the PNHP DC office will set you up with an appointment to see your representatives. Sen. Warner especially needs to hear from docs in white coats, as he does not yet "get it."

Two state legislators from Virginia, Senator Henry L. Marsh, III, 16th District, and Delegate Joe Morrissey, 74th District, were among the initiating sponsors of a letter to state legislators throughout the United States asking them to endorse an appeal to the members of the 111th Congress to co-sponsor, support, and pass HR 676, and one to President Obama to sign the legislation.

VA PNHP members can support this effort by phoning their state senators and delegates to ensure that they have read the materials that they were mailed, answering any questions that they may have, and asking them to endorse. The materials that were sent can be seen here.

Participants are encouraged to contact Healthcare-NOW! with information about which state legislators they contact to help track the progress of this action.

Medicare: Made in America - DC Lobby Day and Rally

VA PNHP members and single-payer supporters from across the country rallied in Upper Senate Park in Washington, DC on the 44th anniversary of Medicare to call for Medicare for All. Speakers included leaders from each of the member organizations of the Leadership Conference for Guaranteed Health Care, Representatives John Conyers and Eric Massa, Dr. David Scheiner (President Obama's personal physician of 22 years), and numerous other activists and politicians.

Many participants had made appointments to meet with their Representatives or Senators to lobby for a single-payer health care system following the rally. When it was learned that members of the Congressional Progressive Caucus had called an outdoor press conference to affirm their support of a "robust public option", appointment-goers were joined by others from the rally in an impromptu march toward the House. The single-payer supporters surrounded the press conference in silence, holding aloft their signs calling for passage of HR 676.

Your Ass is Not Covered theater action 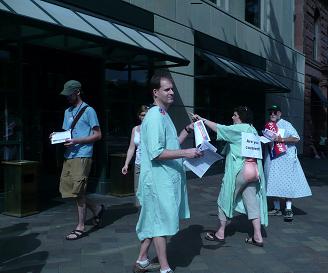 VA PNHP members joined activists from other member organizations of the Virginia Coalition for Guaranteed Health Care at the America's Health Insurance Plans (AHIP) national headquarters in Washington, DC on July 10 for a Your Ass is Not Covered theater action. Participants dressed as doctors and hospital-gowned patients jumped through hoops that symbolized those that hospitals, doctors, and patients must jump through to be compensated for care given or received.

According to Dr. Jan Gable, their "Honk for Guaranteed Health Care" sign received a constant response.

The Not Covered Campaign was launched by the Private Health Insurance Must Go (PHIMG) coalition of New York.


Organizing activists for HR 676 by CD

VA PNHP member Dr. Ferguson Reid has written a letter calling on single-payer healthcare supporters to sign up with Congressional District coordinators to receive periodic information about political actions and lobbying for HR 676.

Please read the letter, sign up, and then forward the letter to others. For those who have time to devote to organizing, additional coordinators are being sought at city, county, and precinct levels.

According to Dr. Miller, "90% of people agreed with our message and most did not know that their rally was not supporting Medicare for all."

Call for Announcements and Reports of Activism

VA PNHP members who are planning actions can send their announcements to the webmaster for inclusion in our Upcoming Events section. Members who have participated in actions can use the same link to send reports of their experiences.